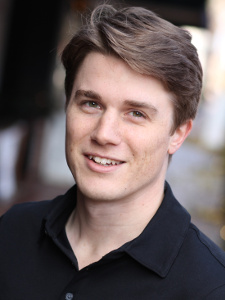 ENSEMBLE, THE MARRIAGE OF FIGARO

Benjamin Adams, described as having a pure and effortless tone, has been in a wide variety of lead and supporting roles for over eight years. Most recently, Benjamin performed the role of Mordred in Indianapolis Opera’s production of Camelot. Benjamin has performed leading roles such as Tony (West Side Story) with the Evansville Philharmonic Orchestra and the IU Opera Theater, Harold Hill (The Music Man) with IU Opera Theater, and Joseph (Joseph and the Amazing Technicolor Dreamcoat) with the Mill Race Theater Company. Other Roles Benjamin has sung include Cliff Bradshaw (Cabaret), Bill Sykes (Oliver) and Augusts Gloop (Willy Wonka). Benjamin has several credits in the operatic repertoire including Harry Bailey (It’s a Wonderful Life), Dancairo (Carmen), and Prince Yamadori (Madama Butterfly). Benjamin is also a lover of operetta and has been seen either performing in leading roles, directing, or being in the chorus of several Gilbert and Sullivan shows. Benjamin Received a Master’s and Bachelor’s of Music in voice from the Indiana University Jacobs School of Music.