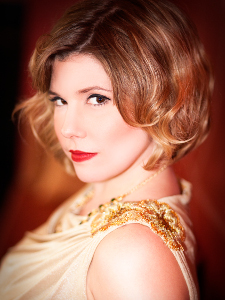 MARCELLINA, THE MARRIAGE OF FIGARO

Hailed for her “deliciously over the top” and “powerful mezzo” by Opera News, contralto Alissa Anderson wields her comic prowess, striking features, and her “powerful vocalism” to great acclaim. Ms. Anderson achieved a considerable success and was celebrated for being “impeccably prepared” and “splendid in every way” when she stepped in as Florence Pike in Santa Fe Opera’s Albert Herring under the baton of Sir Andrew Davis. Recent engagements include Carmen in Le tragédie de Carmen with Opera Birmingham and Louisiana Opera, Frugola / Principessa /Zita in Puccini’s Trittico with Opera Santa Barbara, Opera Company of Middlebury and Opera Delaware, Marcellina in Le nozze di Figaro with North Carolina Opera and Opera Santa Barbara, Mother Goose in The Rake’s Progress with Utah Opera, Tisbe in La Cenerentola with San Diego Opera and Fort Worth Opera, Mistress Quickly in Falstaff and Maddalena in Rigoletto with Opera in the Heights, and Cleo in The Most Happy Fella with Tulsa Opera.  In 2019, she returns to San Diego Opera to sing Maddalena in Rigoletto, debuts with Opera San Antonio as Marthe in Faust, and makes both her company and role debuts with Opera Philadelphia as Princess Clarissa in Prokofiev’s The Love for Three Oranges.

Equally at home on the concert stage, Ms. Anderson has been the mezzo soloist in John Adam’s Grand Pianola Music with the Dallas Symphony Orchestra, Haydn’s Lord Nelson Mass, Mahler’s  2nd Symphony at Lincoln Center, as well as over 25 performances of Verdi’s Requiem throughout the United States and Europe.