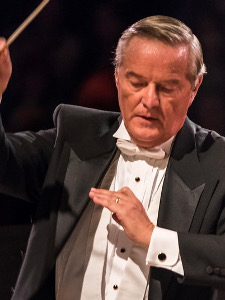 Dr. James M. Bankhead was the Music Department Head at Utah State University on July 1, 2011, until he retired in July 2015. He was previously Director, School of Music at Sam Houston State University, Huntsville, Texas. He is very active as a guest conductor and clinician.

Before going to Sam Houston State in 2006, he was the Chair, Music Department at California State University, Chico 1994-2006. In addition to his administrative leadership, he was director of bands, master’s degree advisor, and conductor of the Opera Workshop orchestra. He was the principal guest conductor of the Shasta Symphony Orchestra in Redding, CA, and he is a frequent guest conductor, clinician, and music specialist at music events throughout the country.

Prior to his appointment at CSU, Chico, Dr. Bankhead was Executive Director of the Green Bay Symphony Orchestra and Producer at the Weidner Center for the Performing Arts. He produced shows, concerts, and festivals involving artists ranging from Bill Cosby to the Pittsburgh Symphony Orchestra.

Dr. Bankhead completed 22 years of military service in the Air Force retiring as a Lieutenant Colonel. He served as Commander/Conductor of the United States Air Force Band in Washington 1985-1991 and Deputy Commander/Assistant Conductor of that organization from 1976-1985. Prior to that, he was Chief of Bands and Music for the Air Force stationed at the Pentagon. He has conducted in all 50 states and 18 foreign countries.