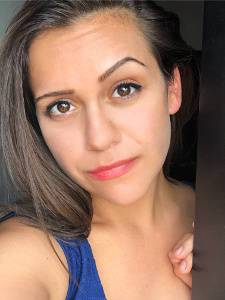 SUSANNA, THE MARRIAGE OF FIGARO

American-Italian Soprano Rose-Antoinette Bellino praised as a “Vocal Powerhouse” and known for her “brilliant vocal acrobatics”, began performing in operas at the age of 10, and has been making a name for herself ever since.  She is thrilled to be making her UFOMT debut!

This 2018/2019 season Rose-Antoinette sang the roles of Lucia in Lucia di Lammermoor with IU Opera Theater, Adina in L’elisir d’amore in Tel Aviv Israel with the Israel Vocal Art Institute, and then returned to IU Opera Theater to sing Blanche in Dialogues of the Carmelites. Next year she looks forward to making her New Voices Opera debut premiering the role of Lady Jane Grey in The Queene.

Rose-Antoinette’s operatic repertoire also includes Soprano Angel in Jake Heggie’s It’s A Wonderful Life, both Königin der Nacht and Erste Dame (Die Zauberflöte), Dido (Dido and Aeneas), Princess (L’enfant et les Sortilége), The Mother (Amahl & The Night Visitors), the Kitchen Boy (Rusalka), as well as premiering the role of Plythia specifically written for her in the operatic adaptation of The Legend of Sleepy Hollow by Dr. Mark Volker. She was also Partners for the Arts 2017 2nd place prize winner for “Promising Young Artist”.   ​