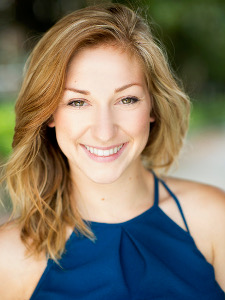 Molly is beyond excited to be making her UFOMT debut this summer! Born and raised on the Central Coast of California, she moved to Scotland to obtain her BA Honors in Musical Theatre from the Royal Conservatoire of Scotland in Glasgow, then went on to get her Masters in Classical Acting with a Shakespearian emphasis form the London Academy of Music and Dramatic Arts. After her schooling, she returned back to the states and has been enjoying working since! Favorite previous Musical Theatre credits include: Sophie Sheridan in Mamma Mia and Ellie Blake in Freaky Friday at PCPA Theatrefest, Val in A Chorus Line at Sierra Repertory Theatre, Dyanne in Million Dollar Quartet at Cumberland County Playhouse, and Elle Woods in Legally Blonde at The New Atheneum in Scotland. She’s also very excited to be joining the Oregon Cabaret Theatre family this fall in Ashland, playing Johanna in their upcoming production of Sweeney Todd: The Demon Barber of Fleet Street.

She would like to thank her mother and her fearless fiancé, William, for always reminding her to ’seize the day’ herself. Thanks for coming and enjoy the show!