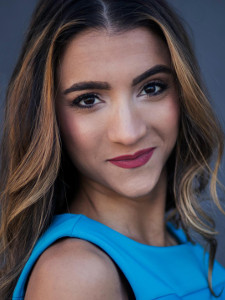 CHERUBINO, THE MARRIAGE OF FIGARO

Greek mezzo-soprano, Marianthi Hatzis, was seen most recently as Anita in West Side Story with Indiana University Opera Theater. Other appearances at IU included Zulma (L’italiana in Algeri), Mercédès (Carmen) and Liat (South Pacific). Ms. Hatzis performed in Lefkada, Greece as Second Woman in Dido and Aeneas with Lefkas Music, where she also covered the role of Dido. She was seen as Poppea (L’incoronazione di Poppea) and Giannetta (L’elisir d’amore) with the Indiana University Summer Opera Workshop.

During her time at IU, Ms. Hatzis was an avid performer of contemporary music, premiering the title role in Kimberly Osberg’s opera, Thump, in the Fall Exhibition of New Voices Opera. She performed as a soloist with NOTUS, IU’s contemporary vocal ensemble, and was a member of Eric Whitacre’s Chicago premier of Paradise Lost: Shadows and Wings.

Ms. Hatzis was awarded first place in the Indianapolis Matinee Musicale Competition, first place in the Fourth Year College Women division of Indiana NATS (National Association of Teachers of Singing) Chapter, and first place in the Tristate College Vocal Competition through the Opera Guild of Dayton. She was named a semi-finalist of the Bel Canto Foundation Opera Contest and of the New York Lyric Opera Theatre National Vocal Competition. During her time as a Young Artist at SongFest, Ms. Hatzis performed in masterclasses with Martin Katz and Alan Smith, and performed in a masterclass with Jake Heggie at Indiana University.

Ms. Hatzis is originally from the suburbs of Chicago and earned her Bachelor of Music and Performers Diploma at the Indiana University Jacobs School of Music, where she was a Graduate Assistant. Ms. Hatzis is a current student of Franco Bertacci in Sarasota, Florida.