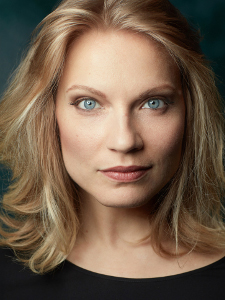 Molly Mustonen is hailed by The New York Times for her “powerful sound and striking stage presence,” as she continues to garner critical acclaim throughout North America and Europe for her performances in both musical theater and opera.

An avid performer of contemporary opera, Opera News praised Ms. Mustonen’s “sensitive, nuanced portrayal” of Nina in the New York premiere of Thomas Pasatieri’s revised opera, The Seagull. Molly reprised the role of Nina as a winner of the Armel International Opera Festival and Competition, a European Premiere that was broadcast LIVE to over 40 countries and to more than one million online subscribers, from Hungary’s National Theatre. Molly’s additional operatic roles include: Juliette in Gounod’s Roméo et Juliette, Abigail Williams in Ward’s The Crucible, Magda in Puccini’s La rondine, Zerlina in Don Giovanni at Utah Festival Opera, Mimi in La bohème, Musetta in La bohème, Nedda in I Pagliacci, Frasquita in Bizet’s Carmen, Elvira in L’italiana in Agleri, Romilda in Handel’s Serse, Beauty in Gianinni’s Beauty and the Beast, The Wife in Wargo’s The Music Shop, Madame Silverpiel in Mozart’s The Impresario, Carmela in Menotti’s The Saint of Becker Street, as well as multiple performances as Martha Sheldon in the award-winning production of Robert Ward’s The Crucible at the Mezzo Television Opera Festival in Szeged, Hungary. Molly was featured in the role of Elizabeth in the World Premiere reading of Thomas Pasatieri’s God Bless Us Everyone. Additional New York premieres include: Ms. Hedehog in Tobias Picker’s TheFantastic Mr. Fox, Sophie in Picker’s Emmeline, Florida Fandango in Randall Eng’s Florida, Mollicone’s The Face on the Bar Room Floor in the duel-role of Isabelle and Madeline, and Tallulah Carter in the New York Premiere of Pasatieri’s The Hotel Casablanca, for which critics proclaimed Molly as “nothing short of sensational.”

Molly is the recipient of the prestigious University of Houston Cynthia Woods Mitchell Center for the Arts Fellowship, she is the North American winner of the Armel International Opera Competition and Regional Finalist in the Metropolitan Opera Council Auditions.