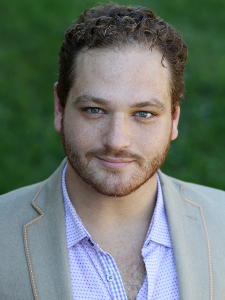 DON CURZIO, THE MARRIAGE OF FIGARO

EVANGELIST, ORATORIO FROM THE BOOK OF MORMON

26-year-old David Smolokoff hails from West Long Branch, New Jersey. David is a classically trained tenor and holds a bachelor’s degree in voice from The Juilliard School. He recently received his master’s degree from The Jacobs School of Music at Indiana University where he performed the role of the Witch in Humperdinck’s Hansel and Gretel, and The Duke in Gilbert and Sullivan’s Patience. He recently performed Britten’s Serenade for Tenor, Horn and Strings with the Jacobs School’s Summer Philharmonic. He has covered the roles of Don Ottavio in Don Giovanni and The Italian Tenor in Der Rosenkavalier at the Chautauqua Institute Summer Music Festival. Other operatic roles include the Champlain of the Monastery in Dialogues des Carmélites, Bill in A Hand of Bridge, and the Majordomo in Der Rosenkavalier. On the musical theatre stage, David has performed the role of Tony, in the Axelrod Performing Arts Perry Award winning production of West Side Story for which he was nominated as best leading actor in a musical. He has also won awards and nominations for best leading actor for his portrayals of the Beast in Beauty and the Beast, and Joseph in Joseph and the Amazing Technicolor Dreamcoat. David has given vocal recitals in Lincoln Center’s Alice Tully Hall, The Morgan Library, and recently sang as a soloist for the Greater Shore Concert Band’s 50th anniversary concert performance at Carnegie Hall. Additional performances include recitals for The Puerto Rican Children’s Foundation in San Juan, Puerto Rico, and for the Argentinian Consulate. He is a regular soloist with the Indianapolis Baroque Orchestra having performed Handel’s Messiah, Bach’s Magnificat, and several cantata concerts. David enjoys teaching voice and piano at select music schools in New Jersey and Indiana to students of all ages.