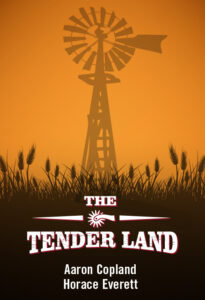 Laurie feels alone on her family’s prairie farm until a couple of drifters, Top and Martin, are hired as farm hands. At Laurie’s graduation dance, she falls for Martin. Their love grows with each song and soon the pair makes plans to elope. Will they fulfill “The Promise of Living”? Written by the Dean of American 20th Century composers, Aaron Copland. The Tender Land is performed outdoors against the beautiful backdrop of the Griffin Farm.

By arrangement with Boosey & Hawkes, Inc., publisher and copyright owner.