The Vera Scammon Memorial Endowment Fund was created in April of 2008 by Michael Ballam, General Director of Utah Festival Opera & Musical Theatre. This perpetual fund is intended to honor the memory of Vera Scammon, a brilliant soprano, generous teacher, and extraordinary woman who deeply touched the lives of many. The fund will be used to continue Vera’s work in blessing the lives of young singers. 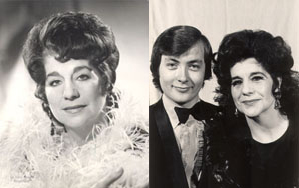 A MESSAGE FROM MICHAEL BALLAM

If I have achieved any measure of success in the world of professional Opera and Musical Theatre it is due to Vera Scammon. I had dreams but few tools to become a professional singer when I met Vera in Bloomington, Indiana in December of 1972. I believe it was more than “sweet chance” that led my footsteps to hers, but rather an act of Loving Divine Providence. She took me into her vocal studio as an overload, which meant she received no compensation for the hours of devotion she gave to me and hundreds of other singers who enjoyed stellar careers.

I don’t believe she saw in me any extraordinary talent, but she did see a desire to work and learn. Vera would work with any student as often or as hard as they were willing to invest in the process. We made quite a pair. When I was not working with her vocally (nearly every day), I accompanied at the piano in her studio. I wanted to absorb all of her wisdom and devotion. She attended every stage rehearsal of my debut as a tenor in the torturous role of Hoffmann. She breathed every breath and sang every note with me from the audience. She was there with my debuts in Chicago, NYC, San Francisco, and was in the Ellen Eccles Theatre when it was still a dilapidated movie theatre as the dream was born to restore it. She believed in me from the beginning and supported me and all her students throughout their careers. She was in the audience in our premiere season at the Utah Festival Opera and nearly every season since giving free master classes and private vocal instruction to countless singers. She was more than a singer, her very life was a song!

Click the link below to securely make a donation online.